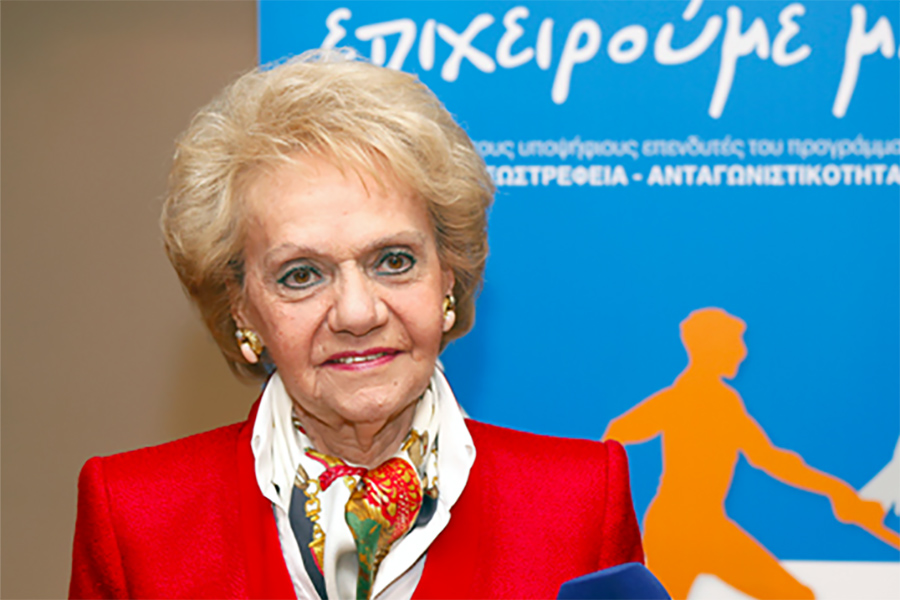 President of the Panhellenic Exporters Association

Mrs. Christina Sakellaridis heads the Panhellenic Exporters Association, an organization with nearly a century of experience supporting the Greek export industry. With an economic recession and financial crisis now largely behind them, Mrs. Sakellaridis is confident Greek export businesses can thrive through today’s challenges of Brexit, US President Trump’s tariffs, and unstable neighboring countries. She sees positive signs from the new Greek government, such as lowering taxes on businesses, which will undoubtedly allow the export industry to continue to grow

The Panhellenic Exporters Association has been in existence for 75 years. Can you give us an overview of the Greek export market in recent years and how it has grown?

When the Greek economy went into the difficult years of recession, there were two sectors that remained strong: tourism and exports. It is remarkable that both continued to increase year by year during that period. If you came here during the recession, you saw many shops shutting down because the whole supply chain was failing. To find a way to continue to keep their doors open, companies began looking beyond Greece to market and sell their goods. They started with the traditional clients of neighboring countries such as Germany, Italy, and other European countries. As they gained traction, they began to look further afield. Today, Greek products are exported to 100 countries outside the EU. Currently, Burkina Faso buys nearly 5 million euros of exports from Greece. That is how far our reach in the export market has become. We have a global presence.

Today, Greek products are exported to 100 countries outside the EU

How does the Panhellenic Exporters Association support Greek companies exporting to Europe and the world?

What do you see as current challenges and opportunities the Greek export market faces?

Right now, we are facing three major challenges in Greece, and in European exports more broadly. The first is Brexit. The UK is a very good client for Greek exports; it ranks number eight for us. Once it leaves the EU, we expect the pound to devalue, which means our products will be more expensive on the British market. We also will face new tariffs and trade barriers with the UK. Combined, these factors will cause the volume of exports to the UK to decrease. Similarly, we are facing challenges with the Trump administration in the United States, which has announced 25 percent tariffs on certain commodities from the EU. Thankfully we have received an exemption for Greek olive oil, which is a victory, but many other commodities are impacted still. Lastly, the Erdogan government in Turkey and the instability caused by his recent actions related to the refugee crisis will have repercussions in Europe. We are still waiting to see the impacts of this. This is a very big issue.

Lately, an unexpected problem has occurred because of Covid-19. When the frontiers of Italy are closed and the circulation of citizens is not permitted, what can you expect regarding our exports? Italy is our number one destination of goods, which receives about €3.659 billion in Greek exports. Fortunately, our government will announce measures aiming to reduce the impact on industries, tourism, and all enterprises related to foreign trade. Unfortunately, we are facing a new very dangerous crisis, given that not only exports are concerned but human lives as well.

What can the government do to support the growth of Greek exports and Greek businesses more generally?

The government has already started implementing tax cuts for businesses. Previously, the government taxed revenue at about 45 percent, which is incredibly high. Then, there was another 6 percent of turnover and another 10 percent for social security. It is very difficult for a business to turn a profit with taxes this high. The current government has announced it will bring the corporate tax rate down from 28 to 24 percent, which will have a big impact. The government is also working to better tap into available funds to help entrepreneurs and Greek business, such as the EU ESPA fund. And the government is implementing fair processes to access these funds. If you want funding, you must submit a formal proposal for review. These sorts of funds can help re-educate unemployed and underemployed individuals in the country. There are programs that help people launch their own businesses, which will further stimulate growth. These funds existed during the previous government, but they didn’t know how to utilize them. There is an air of optimism in Greece right now about where this new government is taking us. They are prepared to govern.

Which sectors and products rank high when it comes to Greek exports at the moment and which ones should be further supported in your opinion?

Our highest-ranking export category is derivatives of petroleum. Last year our total exports were 33.4 billion euros but we are always making a distinction between total exports including petroleum derivatives and excluding them because petroleum prices are so volatile and in the long term, not a sustainable product to build our export portfolio upon. After petroleum derivatives are industrial, aquaculture, and then food products like olive oil and fruits. US President Trump has included fruits, such as canned fruits and fruit compotes, which are a big export product for us, in his 25 percent tariff. We have not yet managed to get leniency on these products like we did with olive oil. It is going to be a disaster. Companies have accelerated their production to try to get products out before the tariffs are implemented, but if they don’t, they will have large quantities of inventory that will sit unshipped.

In one of your speeches you stressed Germany’s importance for Greek exports. How would you characterize the trade relations between the two countries?

Germany has been an incredibly important partner to Greece. During the recession, Chancellor Merkel came to visit us and meet with leaders of our enterprises, big and small. We have close links because of the many years of commerce between the two countries. The German Chamber of Commerce here hosts many expositions and fairs that Greek firms participate in. The Anuga Food Fair in Cologne is the biggest in Europe in the industry and this year 286 Greek companies took part. They did a lot of business and were very happy. We also have cultural exchange through tourism. German tourists don’t only come here for the sand and sun on our islands. Germans have an appreciation for antiquities, so that is a draw for German visitors to choose Greece.